If you desire to make a difference in the world, you must be different from the world.” Elaine S. Dalton

Whatever you do will be insignificant, but it is very important that you do it because that act will make it significant.” Never forget that we rise by lifting others.

As I walk across the lanes of the city,

“The downfall of the attempts of governments and leaders to unite mankind is found in this- in the wrong message that we should see everyone as the same. This is the root of the failure of harmony. Because the truth is, we should not all see everyone as the same! We are not the same! We are made in different colours and we have different cultures. We are all different! But the key to this door is to look at these differences, respect these differences, learn from and about these differences, and grow in and with these differences. We are all different. We are not the same. But that’s beautiful. And that’s okay. In the quest for unity and peace, we cannot blind ourselves and expect to be all the same. Because in this, we all have an underlying belief that everyone should be the same as us at some point. We are not on a journey to become the same or to be the same. But we are on a journey to see that in all of our differences, that is what makes us beautiful as a human race, and if we are ever to grow, we ought to learn and always learn some more.”

“We all do better when we work together. Our differences do matter, but our common humanity matters more.”

‘There are two things in life you cannot choose. The first is your enemies; the second your family. Sometimes the difference between them is hard to see, but in the end, time will show you that the cards you have been dealt could always have been worse.’

“No act of kindness no matter how small is ever wasted.” Aesop

“What you do makes a difference, and you have to decide what kind of difference you want to make.” Jake Goodall

“Your life is your message to the world. Make sure it’s inspiring.” Anonymous

“We rise by lifting others.” Robert Ingersoll

XT-27 wasn’t just any robot. His identification plate read “XT-27: The best, most modern robot”. He was, indeed, the most up-to-date robot currently available, a product difficult to beat. Of course, this made him feel very proud. So much so, that when he saw other robots in the street, he would look at them with a certain air of superiority; he reserved his enthusiastic greetings for other XT-27s.

“All robots should be like us XT-27s”, he thought to himself. He was convinced that no new robot would be able to improve on the XT-27 model, and that the world would be a much better place if all robots were like himself.

One day, he was walking along in Bionic City, when a big yellow door suddenly appeared, about an inch in front of his piezoelectric optical sensors (that’s eyes to you and me, but XT-27 liked to use highly technical-sounding words for everything).

He had no idea where the door had come from, but thanks to being an XT-27, his quick reactions allowed him to avoid walking straight into it. Intrigued, he pulled it open and went through the doorway. The door led to a fantastic city. All the city’s inhabitants were XT-27s and everything he saw there was mindblowing!

Excited at having found his perfect city, he set to exploring the whole place, stopping from time to time to talk to people, telling them what a great thing it was to be an XT-27. Finally, he moved into his moulded fibreglass bubble (a house), on the outskirts of the city. The days passed, but he suddenly realised that there was something about that city that he didn’t like. As all the robots were XT-27s, it meant that no one had any reason to feel better or more up-to-date than anyone else, and, in fact, nobody did. No one looked down on others, and, if truth be told, he found that with the passing of time not even he felt special any more.

On top of that, things became very boring. Everyone could do things equally well, which made it impossible for anyone to stand out from the crowd. Whenever he did anything which he thought brilliant, it turned out that the other robots had done exactly the same thing and at the same time.

So XT-27 started to miss those varied little robots in his previous world. Each one had had its good and bad points, but that made them different and fun. He realised that he would much prefer to meet a clumsy-but-fun TP-4, and spend a while chatting with it, then see yet another XT-27.

So he started searching for that big yellow door. It took him several days to find it, but finally, he did. Just like before, it was standing in the middle of a normal street. He put his hand on the door and looked behind him as if saying farewell to the city that had at first seemed so perfect. Then, he gave the door a joyful push…

When he woke up, the XT-27 was on the ground, and some people were helping him to his feet. He looked around, and there was no yellow door at all. Instead, there was an enormous shiny yellow robot. The XT-27 had bumped into it so violently that the jolt had made his circuits malfunction. The XT-27, surprised at not having managed to avoid the collision, looked carefully at that formidable-looking robot. He had never seen one like it. It seemed perfect in every way. It was taller and more powerful than any other, and its identification plate read: “XT-28, the best, most modern robot”.

So they had done it. The seemingly impossible had happened. The XT-27s were no longer the best robots of all. Even so, our friend didn’t feel the slightest sadness. Seconds earlier, when dreaming about the perfect city, he had learnt that he was very happy to be different and that it was great to have hundreds of different robots; each one with its very own good and bad points.

Mrs Richa Kumar: Mrs Richa Kumar is the Principal of Rahul International School, Boisar, Maharashtra. As a learner and an educator from past 20 plus years in training, teaching, curriculum designing, content development, administration, counselling, workshops for parents, students and teachers. She has set up and designed academic sessions for student development program and promoting inclusive education in schools. She has designed curriculum for multiple publication hoses and even has a Copyright for her design on ‘Perpetual Motor Skill Development Program for Preschool students.’ Mrs Kumar has many accolades with her name ranging from Education World to Edustar (THT Platform) 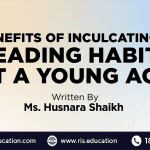 What is the Importance of a Student Portfolio?
August 8, 2022Byadmin